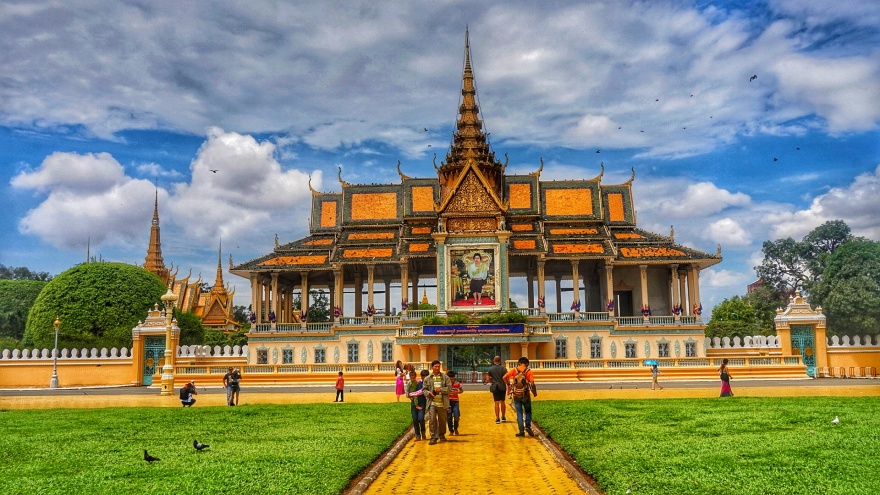 Cambodia is home to majestic and stunning temples of the world. Travelers and backpackers doing Indochina trip do not just pass by this country but they surely include it in their itinerary. Who would want to miss one of the best temples of the world made popular by Angelina Jolie’s movie, Tomb Raider. Although the country had been in dark years due to the abuse and inhumane actions done by their previous leader, Khmers are thriving to move forward from the past building a brighter future. Now, people flock here not just to do volunteer work but also to see the places this country can offer. 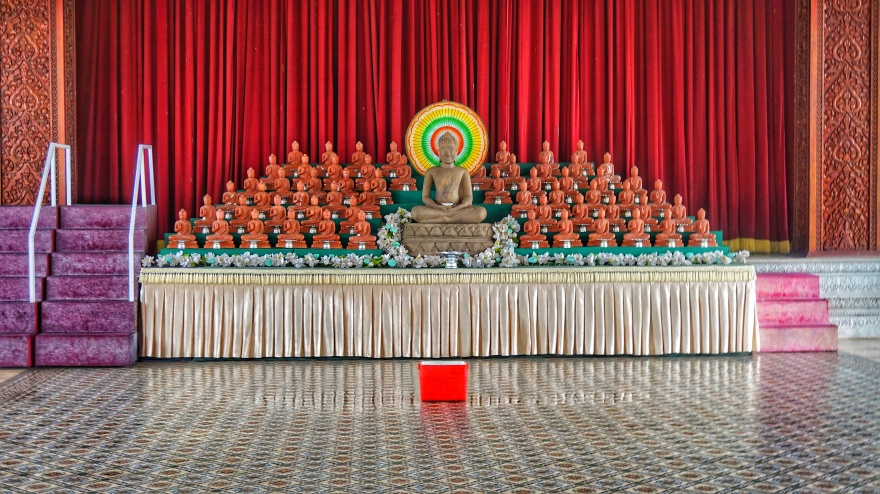 The capital city of Cambodia, a small city with 1.6 million people. A lot of expatriates live here doing volunteer work filling the gap and helping the country progress. When we were here it was a week-long holiday that’s why it looks and feels like a ghost town. Most business establishments are closed and food prices are a bit inflated with a $3 (PHP 150) sandwich in a convenient store. Tuktuk (motor taxi) is their main public transportation. Although there are city buses around, I heard they are not commonly used. During the rainy months of June to December expect that some roads are flooded and can’t be accessed on foot. On our first night we were also greeted with floods, so we can’t walk searching for a place to eat but that’s fine we were able to walk on the following places as they are next to each other. 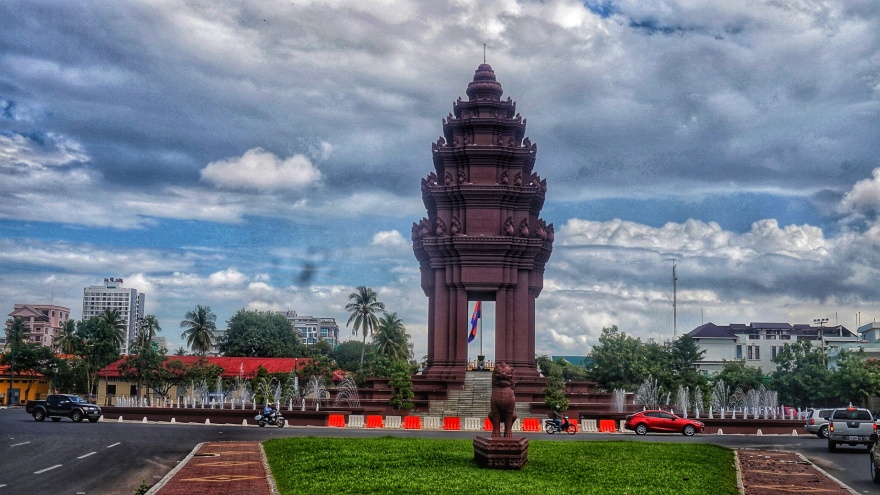 One of the famous landmark in Phnom Penh built in 1958 with a mix of modern and ancient Cambodian architecture. It is gigantic and sits in the middle of the main road and now serves as a place for official activities in the country

Few steps from the Independence Monument you can find King Father Norodom Sihanuok Statue. King Norodom Sihanuok is the king of Cambodia from 1941-1955 and 1993 to 2004. He is a legendary hero for Cambodians because of his campaign against French occupation.

Not far from the Norodom Sihanouk Statue you will find the complex of buildings that serve as the official residence of the King. Strict dress code is implemented here as a sign of respect for the sacredness of the place.

One of Phnom Penh’s five original monasteries, it serves as headquarter of Cambodia’s head Buddhist brotherhood. When we were roaming around the area a monk called us and open one of the temple which serve as a prayer room. He told us to say our wish to Buddha then he whisk water on us while chanting “Goodluck! Goodluck!”.

The central point of the city and its namesake. The temple located on a hill in the heart of the city is believed to be protected by Buddha’s holiness and is remarkable for its historical importance.

Siem Reap province is located in northwest Cambodia. It is the major tourist hub in Cambodia, as it is the city of the world famous temple, Angkor Wat! There’s nothing much to do in this place aside from the night life in Pub Street and Angkor Wat tour, however I find this city more interesting and way cheaper than Phnom Penh. One dollar goodies are everywhere such as snacks, pancake, and exotic food. One of the most interesting thing I did, is ate baby spider in Pub Street. It was tasty but I have to warn you because after 30 minutes my allergy starts to build up and my whole face became reddish and itchy. Aside from those here are some other places to visit in Siem Reap.

It’s the heart of Siem Reap. Just like other walking streets in Southeast Asia, it has lively nightlife composed of bars, clubs, restaurants, street food and entertainment. Draft beers are everywhere for $0.50 (PHP 25). It is close to souvenir markets and food stalls, so everything you are looking for is here.

KING’S ROAD MADE IN CAMBODIA MARKET

It is absolutely worth your time. This is in stark contrast to every other market in town, where the majority of the wares sold are generic made in China, Vietnam or Thailand. Everything sold here are definitely made in Cambodia. From food, art, clothing, homewares, cosmetics, toys, jewelry and more, this is one best way to market and support the authentic product of the country.

The modern temple grounds give few hints as to its 500 year history. Though the lotus-themed architecture seems to emulate temples from over the border, the front gate integrates bayon-style heads and a scene in relief of the Buddha seated under a tree. We accidentally discovered this place on our way to the Royal Garden. We were hesitant to enter but a friendly monk approached us and took the time to talk with us. We had a short chat about his life as a monk until we waved goodbye.

A 15-minute stroll north from the Old Market, along the shady west bank of the Siem Reap River, you will find a restful area from the dusty streets of downtown. A good place to hang out if you ran out of place to visit in Siem Reap. On the Southern part of the garden lies the royal residence building which is not open to public. Local sellers start to approach tourists to sell their products which are way cheaper than local markets.

The grandest temple I ever saw in my life. I do have a feeling that this is not just a temple but a residence or an empire to previous Khmer King. I am amazed on how the building is constructed and built. It made me time traveled from the past and curious about how Khmers live thousand years ago.

We took a day-pass tour in which we explored 3 main temples Ta Prohm, Angkor Thom and Angkor Wat. We hired a tuktuk driver for a day through our hotel in Siem Reap. Although tour agencies offer a day tour in Angkor Wat with hotel pick up and English Speaking guide for $20-35 per pax. I find it more convenient and cheaper to do the former. We started at 8 am from our hotel then first drove to Srah Srang.

It is a chapel as they say to Kama, God of Love. It has a lake and surrounded with trees and a perfect spot to witness the sunrise.

Our driver asked us to enter the temple across the chapel and meet him from the opposite side. Then he drove us to our next destination. 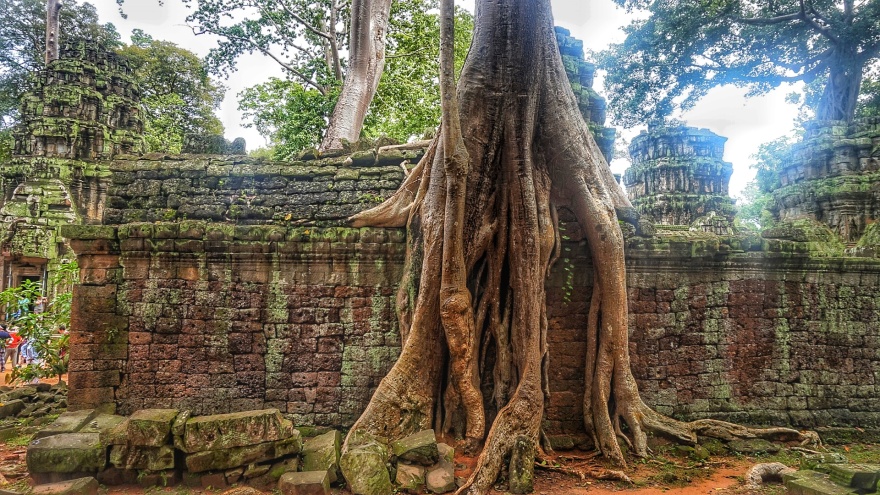 This temple is one of the most marketed by tour agencies. They call it Tomb Raider temple since this is where Tomb Raider movie was filmed. Undoubtedly the most atmospheric ruin, a very mesmerizing place with grown trees around the temple walls. Visitor can’t help to wonder how old these gigantic trees are. 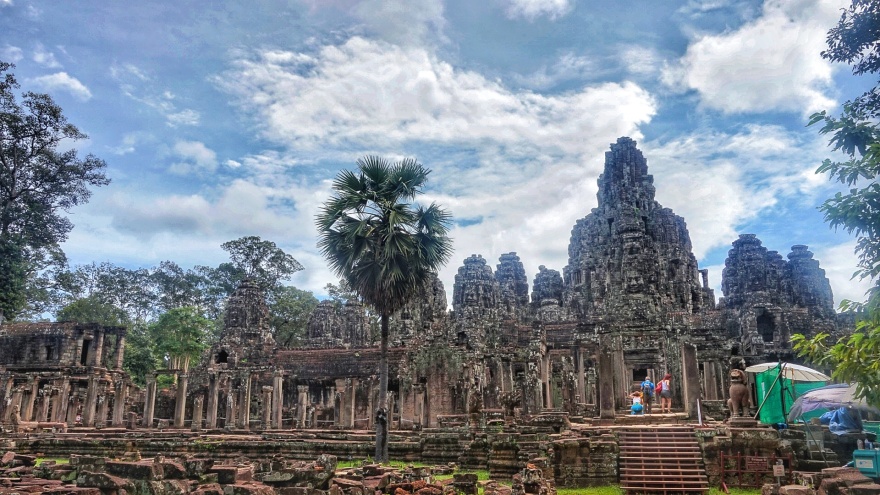 Another impressive place worth the time to explore. While we were entering the huge gate I was wondering, is this a city, an empire or a royal residence? Later I have known that this was the last capital of Khmer Empire. A city where priest, officials of the palace and military lives. There are numerous royal residences enclosed in its huge gates however most of them are under construction when we were there and are closed for safety purposes. Still, I am amazed on how the buildings are beautifully designed, constructed and how they are situated in the heart of the forest.

Angkor Wat is the largest monument of the Angkor group and the best preserved. It is an architectural masterpiece. Its perfection in composition, balance, proportions, relief’s and sculpture make it one of the finest monuments in the world.

Before we enter our last destination for this tour, our driver told us that most of his clients told him that it is the best temple they saw in their entire life. We kinda raise our expectation upon crossing the lake in front of the temple entering  the west gate because of what he said. It is too huge that my knees gave up from all the walking and climbing up the stairs to reach the top. As to what our driver said before, I think it all boils down to preference. While my travel partner is so much impressed with Angkor Wat, I am totally hooked with Angkor Thom.

2 thoughts on “PLACES TO VISIT IN PHNOM PENN AND SIEM REAP, CAMBODIA”